Frozen Bubbles on the Shore

“An Almost Imperceptible Grip” is my first religious-themed exhibition. It was first held in the foyer of Laajasalo Church in Helsinki. Then it became an itinerant exhibition that was held in Paavali Church, Pakila Church and Roihuvuori Church. 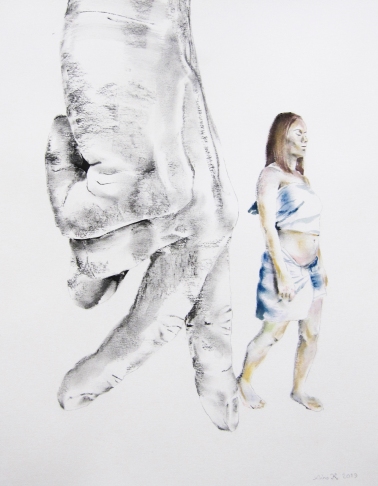 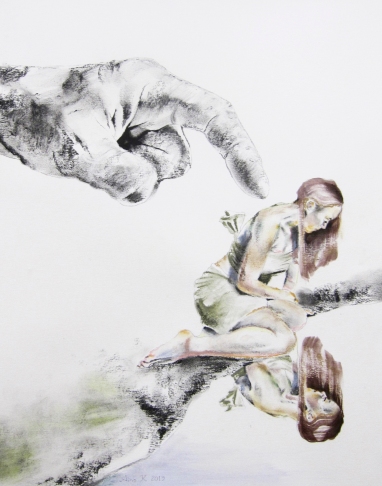 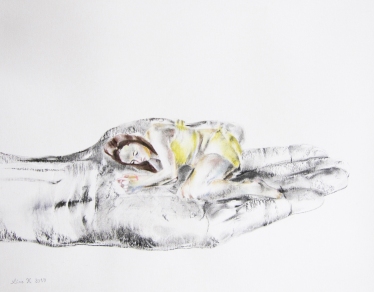 Of all the flowers one
is like an unpolished diamond

My treasure is mine
My nature is fine

My favourite colour is protected
Behind my eyes there is more

We humans are physically and mentally as different from each other as all the flowers that grow around us. Still we are haunted by a need to classify each other into only two categories when it comes to body and gender. Thereby we end up dividing essential human characteristics into two groups, and the individual cannot flourish as a whole. The real gender dwells inside a person and no one but themself can determine it. With elements of nature, I try to unpack our society’s unnatural concept of gender. May all bodies bloom, because each of them in its uniqueness is the most beautiful.

My exhibition “200 000 Years of Longing” told about the long history of humankind and the feeling of longing.

One naturally craves to be with someone else, but approaching them can feel anything but natural. From all my experiences of longing, one is especially difficult to put into words. I long for a certain feeling that seems to have been lost somewhere in the past. It is a very positive experience that includes different visual sights in my early childhood. While it reminds me of my own past, at some level it also brings to my mind the early times of humankind. I started to explore a human world where words were hardly used, only a song mimicking the sounds of nature. The time of the human species has lasted from 200 000 to 300 000 years. Many essential characteristics of humans are even older than that, such as the use of fire and everlasting curiosity. Maybe longing is one of them. Even if we never managed to find common words for the object of our longing, the longing itself connects us to each other and to all the people who ever lived. Our common origin is in the familiar and the unexplored rocky ground that attracts us like a heart. The ground is like a drum that moves the body towards new places, trips, dangers, dancing. A boat is like a cradle, with which one floats upon the element of life. Countless palms have touched familiar rocks, leaving us a trace of a humanly red colour, just like a sign of longing. It is the same longing that we are feeling now. And each time that everything is lost, the most important is the story that remains. It is braided into a cloth and passed on to the next generation. It is hidden inside a perfectly shaped shell that someone finds tens of thousands of years later.

Eight Graces deals with different kinds of survival stories involving gods and human beings. The Graces (Charites) are Aphrodite’s assistants who represent fertility and charm. There have been several versions and combinations of the Graces in different times and in different parts on Ancient Greece. If we consider them all, they are eight, each one with her own name. I introduce the Graces as independent and separate characters, but I also picture certain ever-changing uniform powers they build up together as a whole. My interpretation of the Graces seeks human and empowering figures in which people can easily recognise themselves. They symbolise the individual and diverse strengths and powers within each person.

In my drawings on the theme of nightmare, I deal with a touch that crosses one’s personal boundaries and the fear that it causes. I want to represent the blurring of limits and the distortion of physical or mental contact in interaction between people. Even a harmless looking nuisance is serious, because every being has the right to integrity. An unclear initial setting makes it possible to hurt someone in an insidious manner. Overwhelmed with fear, the victim of violence stiffens, which makes the situation all the more dangerous. Perceiving one’s own boundaries and defending them is an essential way to overcome fear.

One can also escape from another one’s grip, whenever it is possible. From a different point of view, my works represent the experience of fear towards oneself and its halting impact. Confronting and fighting that fear is more helpful than escaping from it.

The position of our body tells a lot, whether we want it to or not. Most of the time, our body language is unconcious. We are quite used to control our facial expressions, but when it comes to the rest of the body, communication is hard to fake. People have a constant need for a spiritual and physical connection to each other and at the same time, they crave for isolation. I want to bring out that contradiction by using humor and by partially covering the bodies. Some of the positions in these drawings are natural and easy. Some are more uncomfortable and difficult to maintain, which means that they are also objectifying. In that sense, my work is also a critique of common images representing people in the media. Society has very harsh expectations particularly for women. 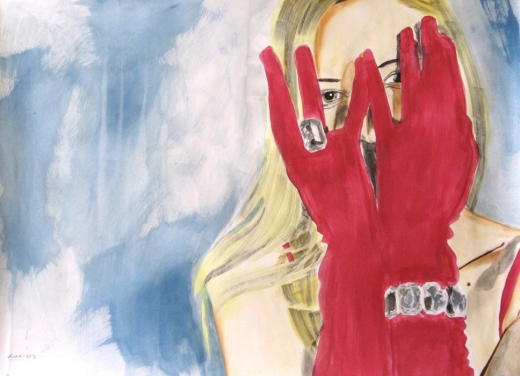 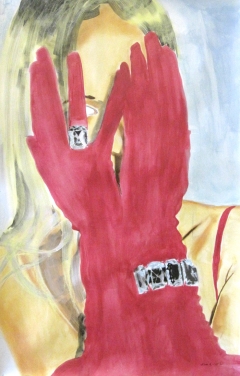 “Cavity” tells a story. I had a dream: It was a cold summer night in Lapland. A tall, big, dark skinned and dark haired woman walked towards me from a dark forest. She approached me and she clearly wanted to say something. We didn’t share the same language, so she went into a certain position. In real life, it would have been completely impossible to achieve. When I woke up, I started to wonder what did she mean by that. I couldn’t figure it out, but it felt very important to me, so I decided to look for a pose as close to hers as possible.

This is a text widget. The Text Widget allows you to add text or HTML to your sidebar. You can use a text widget to display text, links, images, HTML, or a combination of these. Edit them in the Widget section of the Customizer.